The point of this page is to explore the dys-integration of popular music.

Much like the plant and animal kingdoms, culture also runs an evolutionary track (ie, Skinner, 1971 and Wallace, 1970). After watching the steady decline of music quality -- coincidentally following the 1981 advent of MTV (or Empty V as I like to call it) -- I set about wondering why what was happening was happening. By 1983 to 1985, it was obvious to me that something was amiss. It appeared that Frank Zappa's 1981 song 'Tinseltown Rebellion' was indeed true. The music moguls seemed to be switching from providing us with auditory excellence to merely marketing a series of visual images for quick sale. "Hair bands" are born!

Every decade has its hero(s). Pardon me if I don't go as far back as your memory might, but the 1950s produced Chuck Berry, Elvis Presley & Jerry Lee Lewis. The 1960s saw the rise of the Beatles and the Rolling Stones. The 1970s had Led Zeppelin and Pink Floyd. The 1980s spawned....well what? The closest that decade came to producing a major new music force was perhaps the Talking Heads, U2 or Nirvana. All excellent groups, just not quite major enough to cross that magical threshold to super stardom. (I'm actually a little on the fence about including U2 here.)

Because of this proposed 1980s musical missing link, I assert that the cultural development of the 1990s (and beyond) has been greatly warped, or...mutated! Furthermore, I believe that this will remain so until the next Supergroup ignites! This is unfortunate, since our use and enjoyment of music is not confined to the music industry, per se. As we know all too well, music is also found on film sound tracks and, unfortunately, in advertisements -- not to mention what the quality of music does for dance, movement and music therapies. See Berrol (1992) for an intreuging article on the topic of such therapies.

Of course there were lots of bands around, but it is not my intent here to simply list all the great musical groups of the past -- you know who they are! (Frank Zappa, Jimi Hendrix and the Grateful Dead leap to mind.) My point is, that as time goes on, music evolves. There are always a few heavyweight bands that everyone knows and perhaps loves. Then there are the bands that round out the decade's sound. Everyone contributes to the decade, and hence to the next wave of music, too.

Click here if you'd like to check out my concert scrapbook.
==> ICP disses Eminem on the radio! Right click here! <==
Visit My Guestbook
All Languages Welcome!

Well, eventually I came to the conclusion that sometime in the late 70s or early 80s, something tragic happened. Perhaps two people who were "supposed to" meet, didn't. Maybe someone who was to become a major force in the popular music scene died in a car crash while vacationing on a Greek island back in 1977. Lord knows Rock and Roll is no stranger to sudden loss!...but an exemptive loss? Wow. How many of us are aware that we almost lost John Bonham while he was being born? Randy Newman once sang a lyric that went something like this: 'Lord, if you won't take care of us won't you please, please let us be?' The song was called "God's Song (That's Why I Love Mankind)", and was originally released on his 1972 LP, "Sail Away".

This theory of loss may explain: 1) the resurgence in popularity bands borne of the previous decades are currently enjoying; 2) why the decades of the 1960s and 70s are being intensely revisited in the popular media, the result of a cultural vacuum. The Woodstock music festivals of 1994 and 1999, are examples, as are the TV series "The Wonder Years" and "That 70s Show" -- now even the 1980s have chimed in with the short-lived "That 80s Show"!); and 3) why so many people are still dissatisfied with the music that is being created nowadays. (Even the current/former TV shows like "American Idol" and "X-Factor" fit in here, too.)

To some extent, nostalgia is expected from all decades...sort of like an afterburner to squeeze out the last few drops of fuel from the ideas and fashions, etc. But when a link is missing altogether, there's a lot of choking smoke to go through! I guarantee the chemical elements are still there, they just have to be sifted out and remixed in order to burn properly again. I'll sift them out and display them for you on the music2 page, while you then remix and ignite them.

This isn't to say that there's no good music being put out nowadays! For instance, I love Soundgarden, Fishbone, Pantera, NIN, Slayer, Blind Melon, Primus, System Of A Down, Phish, Sublime, Static-X, Pearl Jam, STP, ICP and Green Day's stuff, among others. Instead, I'm just suggesting that the usual process has been disturbed, and that it is up to everyone who cares about our popular culture to contribute to the re-integration of the essences of the previous few decades. What needs to be done eventually, is to reverse the process started in the late 1960s, and turn music back into art, instead of the mere commodity it has become. And I wouldn't count on the music executives to voluntarily do anything which might lessen their profits. That would be like expecting the legislature to curtail the activities of lawyers -- they themselves are mostly lawyers!

One interesting thing about events in general, is that they tend to work like a cue ball "breaking" in billiards. One force translates into many actions and directions, according to the individual proclivities of the ones impacted. A cool example I once heard was to consider the event of a container of boiling water. Into the same boiling water, you put an egg and some pasta. Now, in response to the same environment, the egg gets hard inside, while the pasta gets soft!

Visit My Guestbook
All Languages Welcome!

First off, to be a successful synthesist, you don't overlook or dismiss anything. Yes, Disco may have sucked, but it has influenced the music since. One of Disco's main contributions was the flow of its beat. It's a hard thing to derail! Another was its way of meshing the lyric into the rhythm (ie, Blondie's song "Heart of Glass").

Reggae music is another sensation that seems to have dimmed since. That's a real shame, since what was behind a group such as "Blondie"?: Rock, Punk and Disco, occasionally spiked with a Reggae influence! (An Alternate Link for reggae: here.)

Perhaps it was due to the tragic death of Bob Marley -- the patron saint of Reggae music (from lymphatic cancer in May, 1981), that it began to fade from the popular culture. Who knows? What grabs my attention in the music of Bob Marley and Peter Tosh (both of whom were original Wailers), is the laid back feeling of the music, coupled with a sense of personal and spiritual discovery the lyrics afford. The hard-hitting political commentary is just graaavy, mahn.

Find what you like in each type of music and focus on it. Your Being is the instrument of synthesis. Of course, this is my website, and I cover what I enjoy. Luckily, I have broad taste!

It's important to keep in mind that humans are a very "visual" species. Visual cues go a long way in creating memcons (memory constructures). With that said, I must point to the fallacy of dismissing (or accepting) music based solely on what the music makers look like. Examples which spring to mind here are KISS, glam rockers like David Bowie and Adam Ant; the Sparks, Devo, Angus Young of AC-DC, Cher, Boy George and Cyndie Lauper.

Following this line of reasoning, but switching over to the sports world for a moment, I point to Dennis Rodman. Would you say that his unconventional appearance: 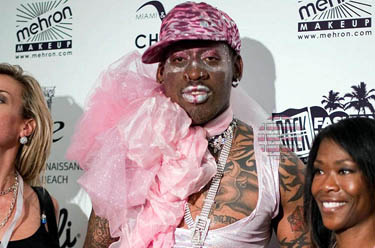 detracts from his ability to play basketball?! Now some may contend that one's outward appearance suggests something else going on in the personality of the person. That may well be true, but in the final analysis...who cares?! The proof is in the results: Does the team win the big game? Is the stadium show sold out? Does the album go tripple platinum?

Furthermore, what about each generation's adolescents? There's always something going on in their outward appearances, since their personalities are (hopefully) turning from children into adults! Teenagers are notoriously resistant to unsolicited advice, etc; they want to come up with their own new state of existence. In my view, the proof of success here is in the avoidance of the pitfalls which lead you to become a drug-addicted career criminal. All paths that lead to the biggest possible happiness for the individual and society are the best ones to make or follow.

Click here if you'd like to check out my concert scrapbook.
Visit My Guestbook
All Languages Welcome!

The main ingredients are all of the "lost treasures", the "heavyweights" from the 1950s on and the others which round out the sound, including, but certainly not limited to: Chuck Berry, Carl Perkins, "Motown" bands like The Temptations and Marvin Gaye; The Byrds, The Yardbirds, The Beatles, The Rolling Stones, The Who, Cream, Eric Clapton, The Grateful Dead, Alice Cooper, Black Sabbath, Jimi Hendrix, The Doors, Led Zeppelin, Jethro Tull, Deep Purple, Lynyrd Skynyrd, Pink Floyd, Frank Zappa, Bob Marley--Peter Tosh--Wailers, Nirvana, the Talking Heads, U2, Aerosmith, CSNY, Heart, Ten Years After, Grand Funk (Railroad), (I guess I should include a disco band or two:) Donna Summer, KC and the Sunshine Band, ABBA and The Village People (Sorry, but I could only find the Cowboy's website so far.).

Then of course, we also have bands like The Dillards (remember them from the Andy Griffith Show?), Bill Monroe, Doc and Merle Watson, David Bromberg, New Riders of the Purple Sage, Hot Tuna, The Flying Burrito Brothers, The Allman Brothers, The Marshall Tucker Band, Stoney Lonesome,

Flashes in the pan: Not to belittle anyone who put a lot of work and effort forward, but some groups produced just a few memorable songs over their recording careers. These could include Timbuck 3 and Adam Ant. I'd hate to put a band like Golden Earring here, since they were hugely popular in their day. However, now if you listen to classic rock stations, all you'll hear from them is "Radar Love" or "Twilight Zone"!

Then there were some groups of the 1980s who simply carried on with the last decade, creating nothing significantly different. These might include Tom Petty and the Heartbreakers, Foreigner/Journey (I can never tell them apart!), Van Halen, Joan Jett, Pat Benatar, Guns N Roses and Metallica. I'm undecided whether Van Halen really belongs here in the "simply carried on with" catagory, since they did start using the electronic keyboards more, like in their song "Jump".

Continue on to page 2, Music in Motion...

The entire realm of the website "http://www.syntheory.com" is
© 2000-Current Year
by Ken Windish. All rights reserved.

Good night Austin Texas wherever you are!